Confession time: Hot Dogs were my absolute favorite foods as a kid. Recreating the joy I used to experience eating them as a vegan is something I never thought would happen. I’ve tried vegan sausages and hot dogs before, but nothing came close to what I remembered until I tried Loma Linda’s Vegan Hot Dogs. Scroll down for my thoughts, whether or not I would purchase them again, plus a bonus recipe for a Kalamata olive relish that you can use at your own barbecues this summer!

In all seriousness, one of my parent’s favorite home movies features me at age two: I’m chomping down on a hotdog in a rest stop Roy Rogers, trying to talk about how good it is with my mouth full. Don’t ask me why, but for whatever reason they find it adorable. Hot dogs were an integral part of my childhood. The way they smell, their taste, their texture. When my family would make burgers I’d always turn them down, instead sitting happily with a hot dog. Or two. Or five. Who’s counting? 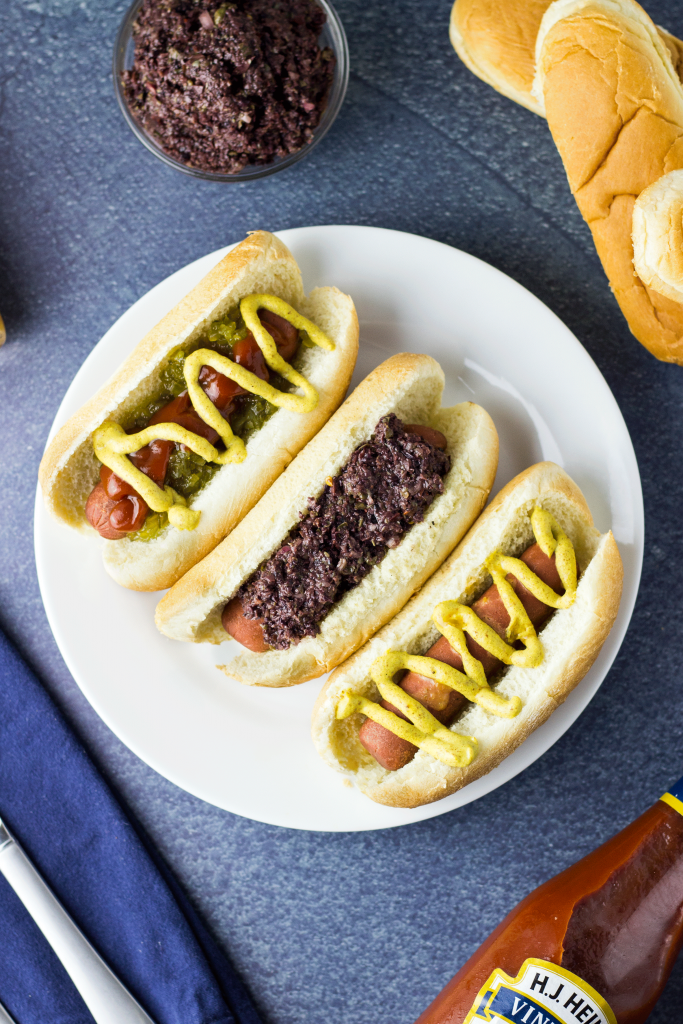 Sarah’s Vegan Kitchen recently reviewed Loma Linda’s Big Franks on her YouTube channel and I was instantly intrigued. They are not readily available in any stores near me, so I ordered one, very overpriced can on Amazon (ten dollars for a can- yikes) Even as a non-vegan, I was always wary of meat in a can, and that didn’t change when this arrived at my door. 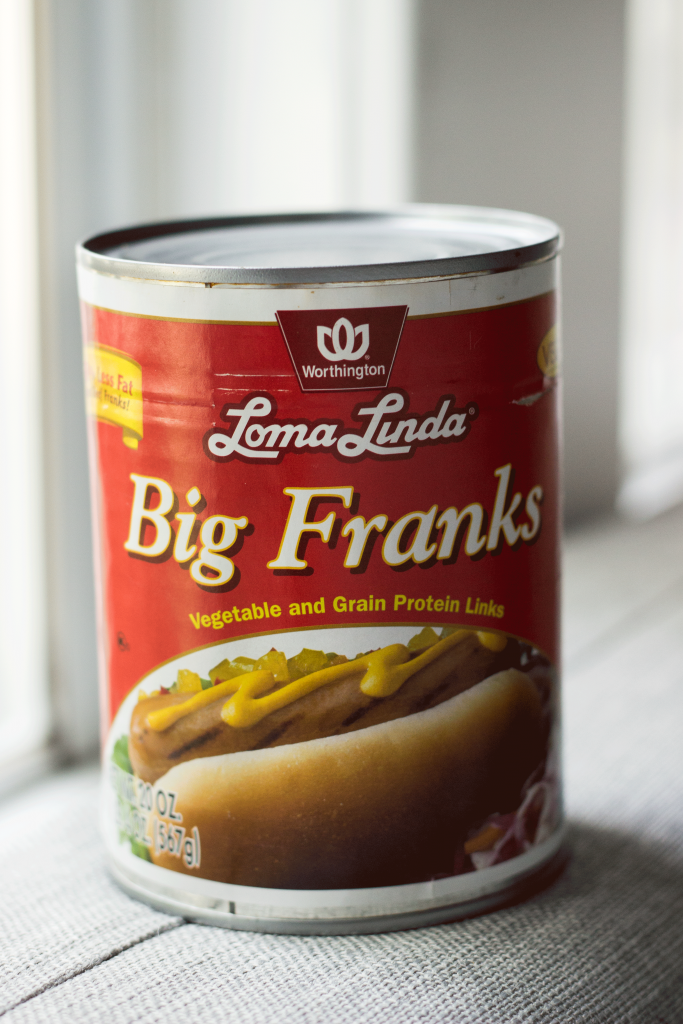 After I opened the can, I still was not convinced that these would be worth ten dollars. They certainly looked like hot dogs, but why did they need to float around in liquid like that? I leaned in for further examination and then the smell hit me. These smell exactly like my childhood. Like the hotdogs my mother used to make for me. It was eerie, and I even checked the can several times just to make sure they were vegan. 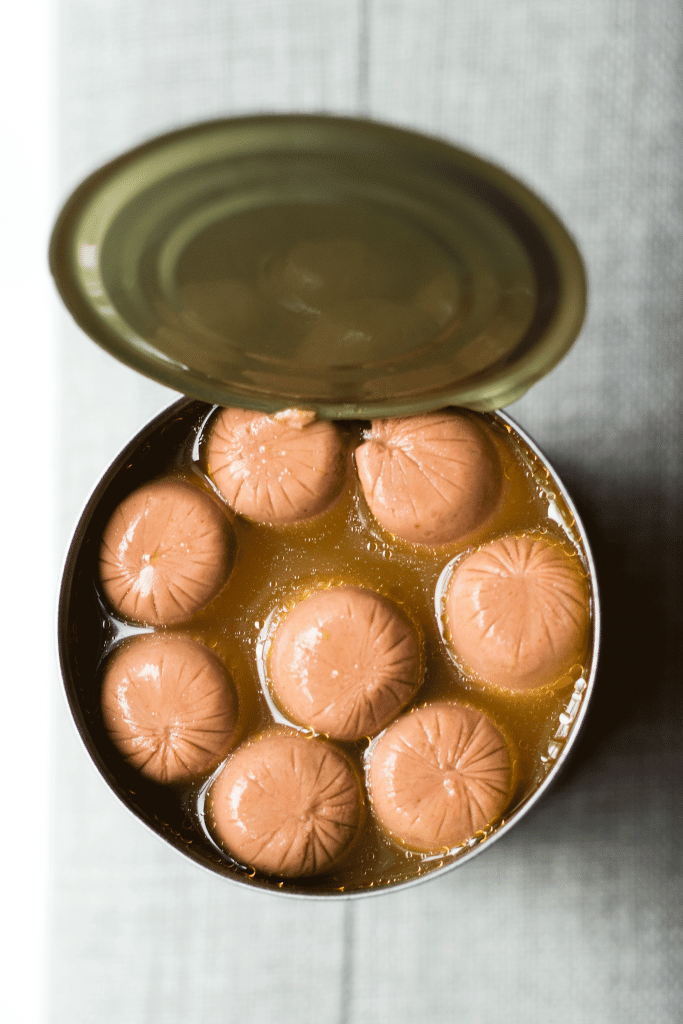 I cooked several of these up in a frying pan with a light coating of oil before piling them high with toppings. After cooking a second one in the microwave, I realized the stove top is not necessary; the franks are already cooked and just need to be warmed through.

I have to say, the taste and texture of these franks was spot on! I never thought hot dogs tasted meaty to begin with, but rather tasted like a combination of smoky spices (Loma Linda is not shy with smoke flavor, though the onion and garlic do come through) and umami that left me coming back for more. Bring these to your next barbecue and they will not disappoint.

I will not tell you how many of them I ate. There were eight in the can to start. After one meal there were…far fewer than eight. But would I buy Loma Linda’s vegan hot dogs again? At such as steep price point, they will not become a pantry staple in my house any time soon. That being said, I would definitely purchase these again for a family barbecue or other special occasion. They are the sort of food that is perfect for the reluctant omnivore in your life. 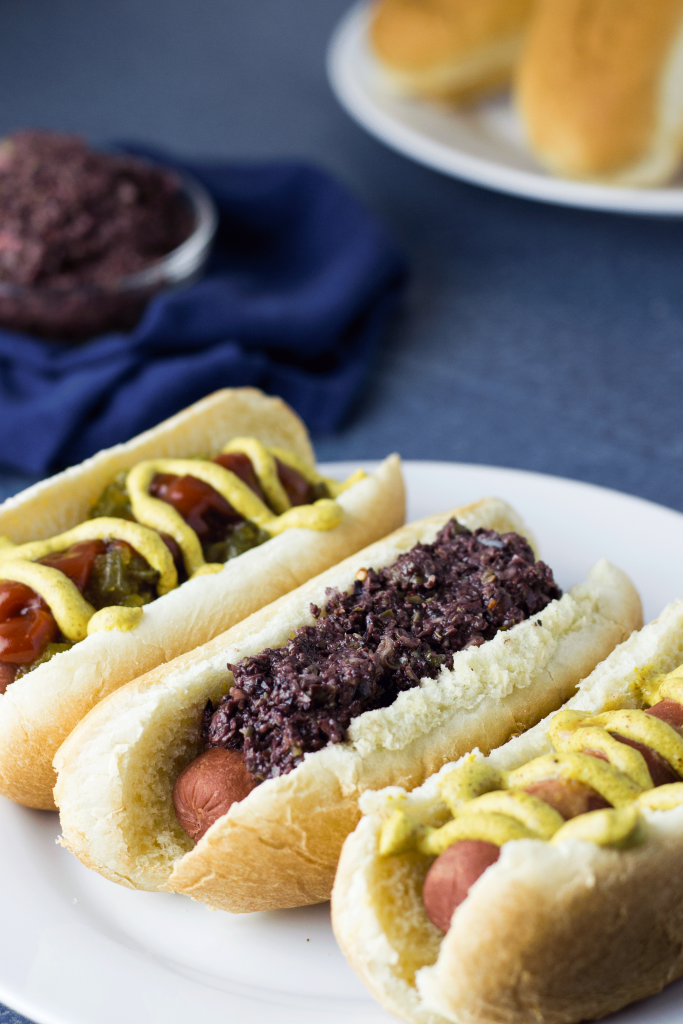 When topping my franks, I stuck to the classic ketchup, mustard, and relish, but I also wanted to try something new. I had a jar of olives in my refrigerator that needed to be  used, so why not make an olive relish? Well, I think it’s safe to say that I have a new favorite hot dog topping.

This simple, easy to put together relish is not just for hot dogs. Use it on burgers, sandwiches, or crackers!
Prep Time5 mins
Cook Time5 mins
Total Time10 mins
Servings: 1 cup
Author: Mel

What is your favorite food for summer barbecues? Are you a burger person or a franks person?  If you’re a burger person, don’t worry. I have a vegan burger recipe coming very soon. Make sure you don’t miss that recipe when it comes by subscribing to my email list. You’ll get each of my blog updates delivered directly to your inbox!