You are here: Home / Travel / The Best Vegan Brunch in Reykjavik, Iceland: Von Mathús
Breakfast is the meal that most frequently poses a challenge when I dine out as a vegan. Pastries, pancakes, and waffles abound, often leaving me with few choices aside from fruit. I hoped to find a special way to mark our first wedding anniversary while abroad, but did not hold out hopes for a vegan breakfast. So imagine my surprise when after just five minutes of searching, my husband and I stumbled upon Von Mathús. It quickly became our favorite meal of the trip, and I will happily argue that it is the best vegan brunch in Reykjavik!
This restaurant offers a three course vegan brunch menu and is just a few kilometers outside of Reykjavik’s city center.Plus, the price point met our expectations for an upscale Sunday brunch. The total cost, for both of us to have the price fixed brunch came out to 7059.90 ISK. At the current exchange rate, this is about 68 USD.  While pricey, it is comparable to the cost of brunch for two in my hometown.
Not only that, but their menu boasted “vegan Icelandic waffles.” Are you kidding me!? Is there a better way to celebrate a wedding anniversary? 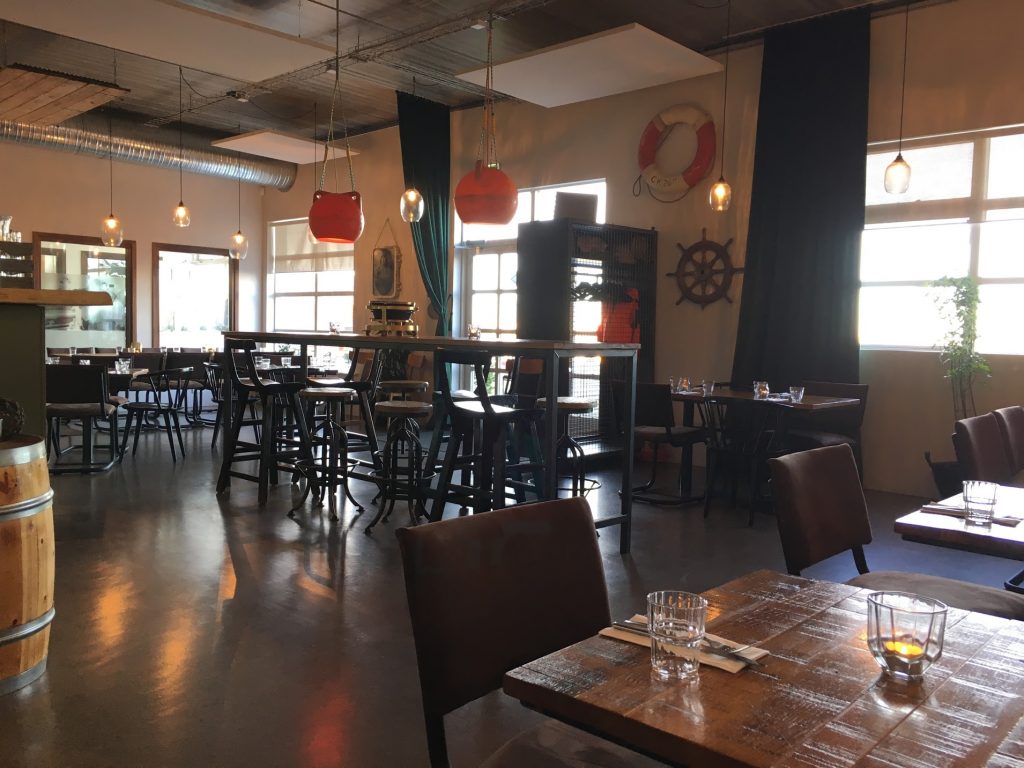 Von Mathus has a cozy, intimate feeling when you sit down for brunch.

I adored this restaurant’s fresh take and unique food combinations. My husband also remarked about the ambiance: even as the restaurant began to fill with patrons, we were never rushed away from our table. The kitchen kept the courses spread out so we could digest, talk, and enjoy the experience.If you are looking to celebrate a special vacation as you travel through Iceland, I cannot recommend Von Mathús enough.

Von Mathús is in Hafnarfjordur, a small fishing village a 20 minute bus ride out of Reykjavik. Our reservation was for 11:00am, as many Tripadvisor reviews warned that it would be crowded. This could not have been further from the truth for us! Once we arrived, we were the only two diners for at least the first hour of our meal. The waitress sat us in the far corner of the dining room, affording us not only view of the whole space, but of the docks outside as well.
We were able to order as soon as we sat down, having decided on the waffle extravaganza a weeks in advance. The first course came out of the kitchen not long after we had warmed up with some cocoa and hot tea. Keep in mind, we knew we were getting waffles, but did not read the men in detail enough to know what was coming with them. Suffice it to say, we had a few surprises throughout this meal. 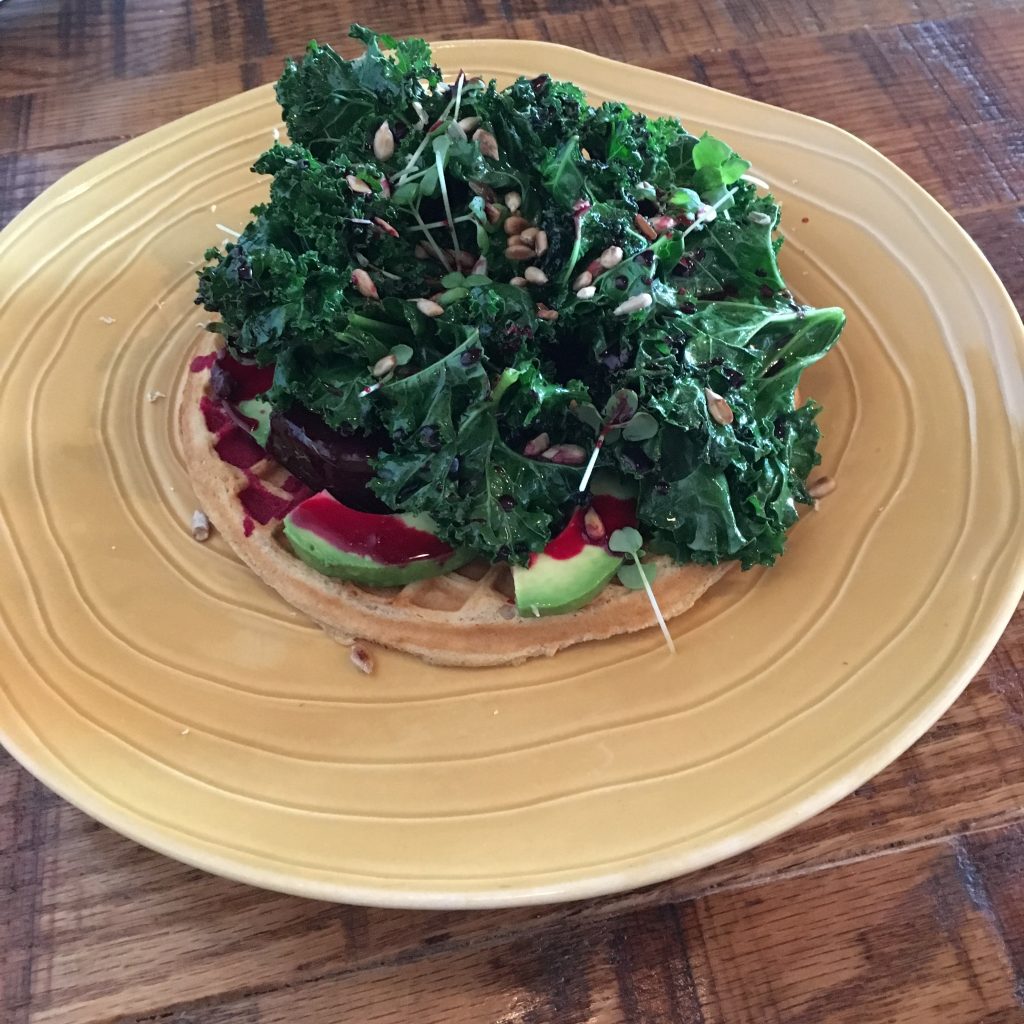 This waffle, topped with beets and massaged kale, was a unique and unexpected combination of flavors.

I looked between the waffle and Justin. “Honey, is that kale?”
Justin, having already taken a massive bite, nods at me. With some confusion, I cut into the waffle myself. This was thinner than the Belguim waffles familiar to many Americans, but no less satisfying. The crack my fork made against the outer crust. The small curl of steam that rose up to my nose. Oh, yes. This was still awaffle, even if there was kale on top.
Not just kale, but beets and avocado, drizzled in a beetroot glaze. The zing of lemon used to soften the greens hit my tongue. The silky, ripe avocado offered contrast. I am also not normally a fan of beets, but this dish was an absolute exception. 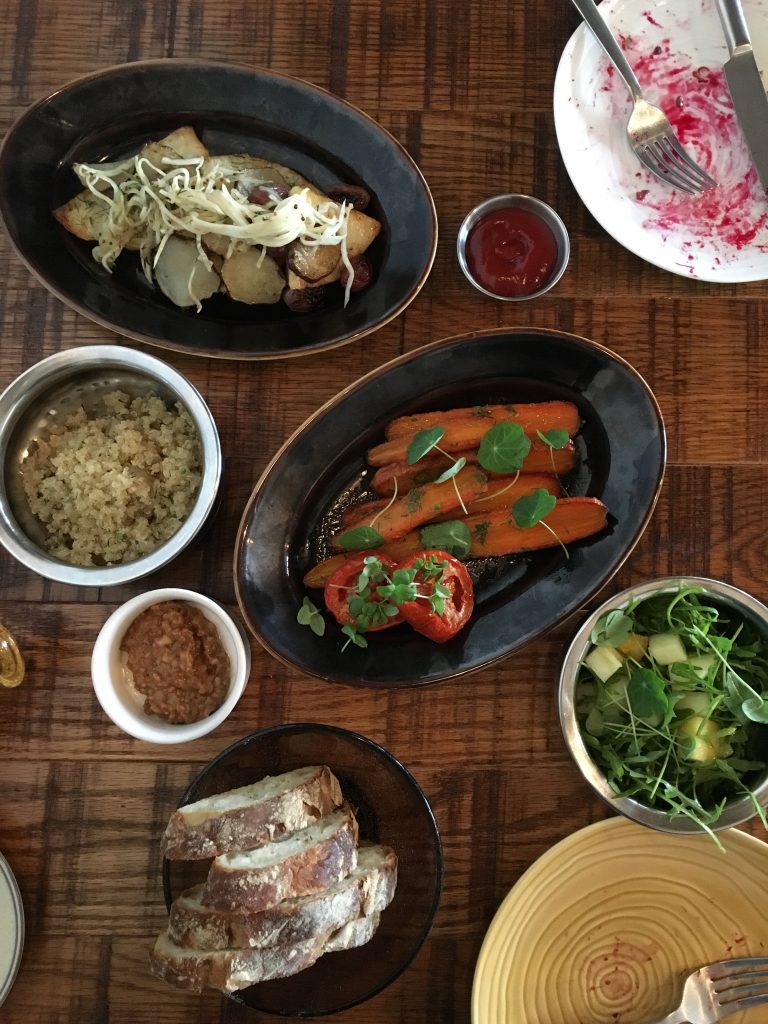 The second course was a varied spread: quinoa, roasted vegetables, microgreen salad,  and fresh Icelandic breads with a nut/seed spread. Just as I had with the kale, I quirked a brow at the quinoa.Quinoa outside of a breakfast porridge? Interesting.Unexpected, but not at all unwelcome after that first bite. Nor were any of the other choices. I actually kept pointing to the window and telling Justin to “look over there!” so I could steal his share of the nut spread. Worth it.
While Justin and I ate, we mused over the fact that the first year of our marriage had already flown past. An entire year of memories to digest as made our way through each plate. Where had the time gone? And just look at where the year had brought us! Here we were, sitting in a village in Iceland, eating the most fragrant bread we’d ever had. Rather, trying to steal from one another the most fragrant bread we’d ever had.
A few more minutes of staring adoringly into each other’s eyes later, the final course appeared: another waffle. 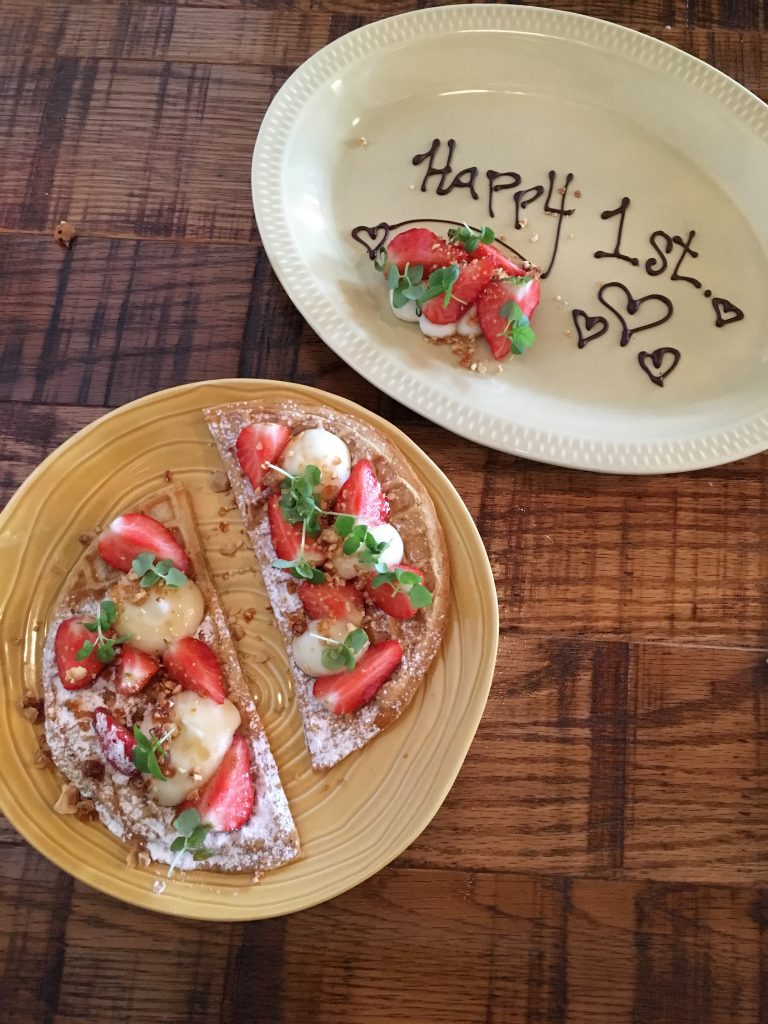 This sweet surprise that arrived along with our dessert waffle is one of the reasons why I think Von Mathus offers the best vegan brunch in Reykjavik-the service can’t be beat!

This waffle was full of surprises, and I should not have expected anything different. Not only was the sweet cream actually a lemon parsnip pureé, but they knew what we were there to celebrate!How!?Did they overhear us?
“Did I get the occasion right?” the waitress asked us, looking hopeful. Justin and I stumbled over our words as we thanked her for the wonderful gesture; we had never had customer service like that before. Though it was not long before we devoured those chocolate well wishes along with our dessert. Later, we would discover that it was Justin’s parents that told the restaurant of our celebratory plans. Sneaky, but a wonderful surprise and a memory we will always cherish.
(If you are looking for some more budget friendly Reykjavik options, check out my post on places that offer some less expensive- but still delicious- fare!)
Planning a trip to Iceland and looking to find the best vegan eats? I’ve got you covered. Subscribe to my email list and you’ll be notified about what else we ate on our adventure.

Previous Post: « Eating Vegan On A Budget In Reykjavik, Iceland
Next Post: I Can’t Afford To Be A Vegan Travel Writer (And That’s Okay!) »